Here is a cheap and easy way to infuse your sex life with a little more adventure. Fun cards with position and game guides to help things sizzle!

Deal this naughty Adventurous deck and rake in a sheet-scorching night of sexual adventure! Each card illustrates an exciting sex position. Play a game and you'll come out with a fully-developed five-position fantasy for you both to reenact together! Includes 50 sexual position cards + 3 game guide cards that'll teach you to play Ultimate Fantasy, Lover's Libido, and Fortune Teller! The Sex! Card Game deck is organized into five different colors according to hotness: red (foreplay), orange, yellow, white, and light blue (scorching hot!). Play one of the included games - the winner gets the fantasy they've created! This game is great for anyone wanting to add some variety to his or her positions, or to become a little more effortlessly adventurous in bed. It's also a great way to open up and get your partner to open up about their preferences and fantasies!

Sex Card Game A Year Of Sex is the Romantic Set! Sexual positions cards. Examples: Arched Leg Wrap technique--he uses a cushion or his hands to raise his pelvis to better expose her clitoris. His thrust stimulates the clitoris more directly and she achieves a better orgasm. Joy Ride technique: in this experimental position there is role reversal with thrusting. His thighs form a V-shape and she flexes her knees up and down.

Each Lesbian Sex! card game explicitly illustrates either a foreplay activity or a sexual position. While playing one of the three Lesbian Sex! card games, you and your lover use the cards to plan out one of the 100,000 possible fantasies. After building a fantasy, you both act it out. Game includes: 45 Sexual Position Cards, 5 Group Sex Cards, 3 Rule Cards, and 1 Unleash Your Fantasy Card. In English and Spanish.

Each Gay Sex! card explicitly illustrates a foreplay activity or a sexual position! While playing one of the three Gay Sex! games, you and your lover use the cards to plan one of the 100,000 possible fantasies. After building a fantasy, you both act it out. Gay Sex! can be played three ways. Let fate decide your fantasy with Fortune Teller, build your adventure while learning about your lover's likes, loves, and lusts with Lover's Libido, or add a third or fourth player with Ultimate Fantasy. Three ways to play, 100,000 ways to win! In English and Spanish. 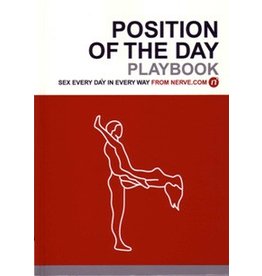 Can't think of a good position to have sex in today? Try this book; you'll never be at a loss for something new to try. Each sexual position, from intriguing to impossible, is assigned a date for every day of the year, a caloric rating, a range of ratings
Add to cart
Position of the Day Playbook
$12.95 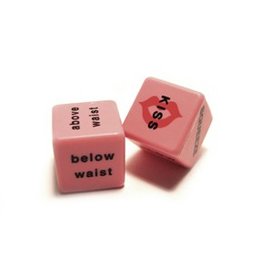 Roll these dice & your chances for great sex are automatically doubled! One dice lists various body parts and the other dice tells you what to do to said parts.
Add to cart
Dirty Dice (English)
$6.00 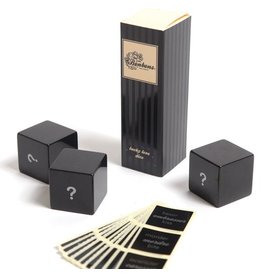 Oooh we are smitten with these sexy black dice!

These come as a set of three with various stickers for you to put on each side, many of which are in French, English and Spanish (so you can get your language
Add to cart
Lucky Love Dice
$10.00 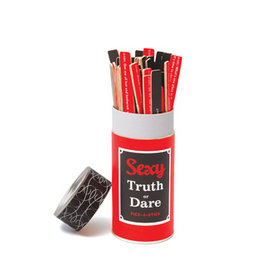 This racy game of Truth or Dare features 100 seductions that will heat up any couple’s love life in the bedroom and beyond.
Add to cart
Truth or Dare Game
$14.95
By using our website, you agree to the use of cookies. These cookies help us understand how customers arrive at and use our site and help us make improvements. Hide this message More on cookies »